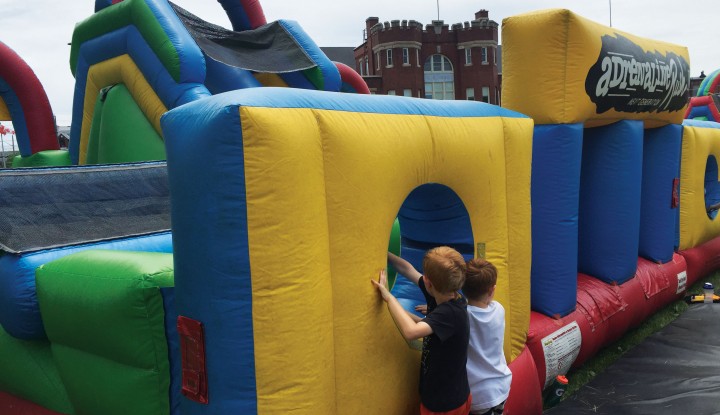 If you were looking to keep your kids busy for four hours while at the same time learning about all the other things that can keep them busy for the next two months over the summer break, then the C-K Youth Festival in Tecumseh Park was the place to be on June 4th Put on by the Municipality of Chatham-Kent’s Recreation Programs department and the Optimist Club of Chatham, the festival is into its ninth year and popularity seems to still be growing; last year had 5,500 guests to the park and this year must have been at least that. I was impressed with the display of things to play on. I have never seen so many inflatables in one area. When you give my two boys, Ethan and Jonah, free access to an inflatable playground, let’s just say there was no dead time except when we had to wait in line to get on the next station; but even the longest line-ups were never more than ten minutes at any given location, and there was so much to choose from that the crowds moved around the park nicely.

I am fairly certain my boys could live in a bouncy castle if I told them I was considering purchasing one for our next home. In fact, they would be so happy that they wouldn’t think twice about breaking their piggy banks open to help with the mortgage. But at the C-K Youth Festival, I found out that inflatables have come a long way since the standard bouncy castle. I have always known them as cubed rubber structures with thick, bouncy floors, usually with a medieval turret on each corner and an opening resembling a fake drawbridge that kids scramble through to get inside. There were two of these types set up, but even they were modified beyond the standard. The first was modelled as a treehouse and the second, a giant aquarium complete with turtles, undersea treasure chests, starfish, and an open shark mouth as the entranceway. There was also a very tall slide in the shape of a pirate ship that my boys would go up, slide down, and get right back in line to go again. Then we got into the inflatable obstacle courses and mazes that kids navigate through by crawling, climbing, running, scaling, and sliding, all the while bouncing along the inflated floors; these often include rock walls with inflatable qualities to make the climbing much more cushiony. There were at least five of these courses throughout the park, the most popular being the camouflaged inflatable set up like an army boot camp.

Aside from the inflatables, organizations from around town had display areas to keep children busy with activities. Just to name a few: The C-K Play Rangers from the Rec department had basketball hoops, beanbag tosses, and giant slingshots (that most kids seemed to catch on could be used to knock over foam blocks and pool noodles set up like a scene from Angry Birds) scattered around. The Rondeau Yacht Club had real windsurf boards that kids could try on dry land. Kennesserie Camp had a life-sized version of the board game Connect Four and a giant game of Jenga made from 2x4s. Young members from local gymnastics clubs, karate dojos, and dance troupes put on live demonstrations to showcase the talent in the city and advertise the types of activities and programs that children can get involved in over the summer. A couple of professional acts were centred in the park and, keeping with the energetic theme of the day, the Detroit Circus aerial acrobats and a group of hula hoop artists entertained the crowds. Not only is the C-K Youth Festival a great way to spend the afternoon by not having to leave town, but it is also impressive to see the number of activities, programs, camps, lessons, and sports that can keep us active all summer in C-K.

DARIN COOK is a freelance writer who works and plays in Chatham-Kent, and is becoming a Dad around town by taking in children’s entertainment and family-oriented attractions with his wife, Jennifer, and their sons, Ethan and Jonah. Share in more of his experiences at www.darincook.ca 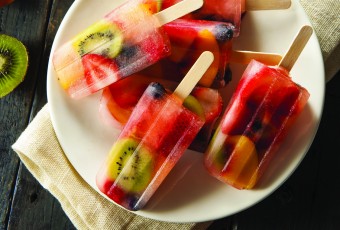