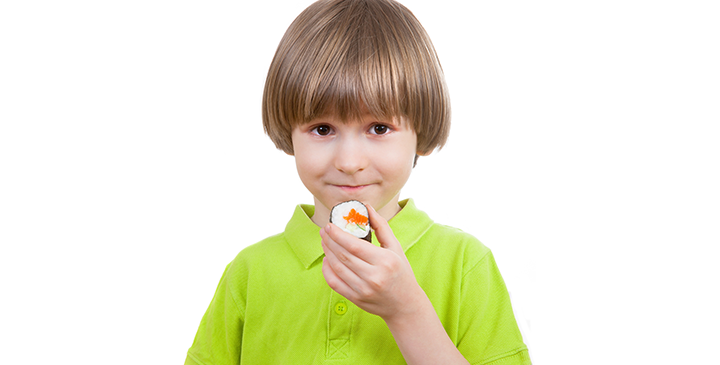 This year my wife and I voluntarily chose to drag out our son’s birthday into one of those three-day, weekend-long events: Saturday was a mosh pit of youngsters in our backyard swinging at a fire truck piñata and playing pin the tail on the Dalmatian; Sunday was a more subdued cake and ice cream party with the grandparents; when his actual birthday rolled around on Monday, all we wanted was a nice dinner at a nice restaurant to recognize the day with our family of four. Mind you, Ethan was turning four, and his brother, Jonah, was only two so we already had a track record of restaurant pandemonium under our belts. We knew a relaxing dinner was not in the cards no matter how nice the restaurant was, so we decided it was best just for Ethan to have his choice.

Given that children’s taste in food is usually far from refined, I wasn’t holding out hope for any fine dining, but something without golden arches overlooking it would be appreciated. As a parent, you quickly learn that a child’s tastes are fickle, everchanging, and downright frustrating. Biologically, I know they must have the same taste buds as the rest of us that detect sweet, sour, bitter, and salty, but they don’t seem to care about the combinations as much as discerning adults. I know their food preferences must be based on taste alone. Jonah’s continuous phrase of “Don’t like it” must come from facts that have caused him to make this decision. He won’t stand for food he has inexplicably acquired a dislike for to cross his tongue. Consistently throwing red peppers across the dining room is a sure sign of his dislike (but then again, who is the irrational one – the child who throws it out of distaste, or the parent who continues forcing it on the child with the same results of splattered food on the wall?).

What I can’t figure out is how some combinations pass any taste test to be repeated. I’ve caught Jonah enjoying a Mini Wheat dipped in ketchup. Ethan is not much better with soy sauce and pickles. Actually, soy sauce on anything seems to be quite alright. Give Ethan a bottle of soy sauce and he’ll dump the whole thing onto his plate, not seeming to mind the overwhelming umami flavour he has created in his mashed potatoes.

One thing my children have developed a taste for that is out-of-the-ordinary for most children is sushi. Most likely it comes from their overwhelming partiality to soy sauce. In the last few years, Chatham has been graced with a selection of sushi restaurants that were not part of the culinary landscape when I was growing up. We have visited each of them at least once as a family and the boys’ favourite so far has been Tokyo Sushi. So we weren’t caught off guard, but pleasantly surprised, when Ethan said, “I think we should go to the sushi restaurant for my birthday.”

When we arrived, we were seated in a booth along the window at Ethan’s request, because they both like to watch trucks and buses go by on the busy street while we eat. These are things that matter to children.

“Let me see what I want,” Ethan said, gazing at the menu, acting pretty convincingly as if he knew what to do, even though he can’t read.

“And please don’t forget my sushi lettuce,” Ethan said very officially to the waitress at the end of our order.

The waitress looked at me quizzically. “He would also like a garden salad,” I translated.

Even though sushi is pretty adventurous by children’s standards, they continue to confound us with their choices. Ethan’s favourite thing at the sushi restaurant is to dip iceberg lettuce into soy sauce. Steamed edamame beans are Jonah’s favourite, but yet try to get him to eat green beans, green peppers, broccoli, or any other green vegetable and he obstinately refuses. For Ethan’s birthday dessert, the waitress brought deep-fried ice cream with chocolate sauce. Ethan loved it, but Jonah looked at it and said, “I want the green one.”

The “green one” being green tea ice cream we had tried before. Realistically he should not like it better than chocolate, but apparently he does. Go figure.

Eating with kids in public is a non-stop adventure. Ethan knocked over a pyramid display of Sapporo beer cans in an aluminium clatter. Wooden chopsticks were used more as drumsticks on the tabletop then eating implements. Ethan managed to fill up his soy sauce container until it overflowed onto the table. Jonah left the usual carnage around his high chair that resembled the aftermath of an epic food fight. But it was exactly what Ethan wanted for his birthday dinner. Our prediction about it not being a relaxing meal was accurate, but we thoroughly enjoyed ourselves. And how can we argue with our son’s penchant for lettuce in soy sauce if it gets us an evening out at a sushi restaurant?

Does Coffee Come in Bucket Size?

The Kids are Alright: On Making Changes & Taking Chances