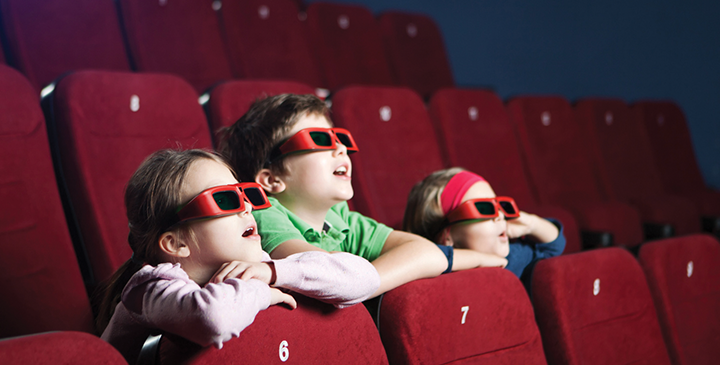 I have always been baffled by these things called “Save the Dates” that people send in the mail to let me know that I will be receiving an invitation to a wedding or some other big event. If you are going through the effort, why not just send the invitation itself? Adding another step to the process could lead to confusion. What if I do keep that date free, but I do not receive the actual invitation? Am I officially still invited? Maybe it’s a man thing, maybe I’m etiquettely-challenged, or maybe I’m just a hypocrite because I did come across an online Save the Date announcement on the Cineplex website that I will happily pencil into my calendar. Community Movie Day is coming this year to Cineplex theatres across Canada on October 24th.

I love going to the movies, but going to the theatre with kids that are my kids’ ages is not always a relaxing outing. We have gone a handful of times over the summer to see some of the blockbusters made for children and it has been getting better. Our six-year-old is generally stationary, but embarrasses us a bit by talking too loudly when he cannot contain himself. But then again, we went to see a special big screen showing of The Wizard of Oz and how could we not be proudly amused when Dorothy steps out of her hurricane-tossed house after the black and white scenes into the technicolour Munchkin Land and he said loudly enough for the whole theatre to hear, “That’s the most beautiful place I’ve ever seen.” ?

Our four-year-old has other issues. He does not sit for much longer than twenty minutes before leaving his seat, leaning on the chairs in front of us, walking in the aisle, and asking to use the washroom more than once. If I continually inject M&Ms into his mouth the entire time, he is more likely to sit still, but that introduces a whole other world of sugar-induced problems that could make matters worse.

When the movies are advertised as being free, I tend to forget these challenges and make my way to the local Cineplex. A free movie these days is an extreme bargain. Ask any group of people and a good percentage of them will say that movies cost an arm and a leg. And that’s just to get in, before you have to exchange your other arm and leg, along with those of your first born, to get some snacks. That doesn’t stop most of us from going, mind you, because movies on the big screen are still magical, even in this day and age when digital entertainment is in the palms of our hands.

I fondly remember last year’s event at the Chatham Cineplex when I was intrigued to find out how much I could save with this special Community Day. There was a selection of movies to pick from that were entirely free and concession food was offered at reduced prices with popcorn and drinks being $2 each. This meant my family of four was getting to stuff their faces while seeing a movie for a total of $16, which is far less than any other day. To boot, 100% of the proceeds from the concession sales go to the Free the Children foundation. I love the idea of saving money and having every penny I do spend go to a good cause.

The movie we saw last year was Walking with Dinosaurs. I knew the kids would love the subject matter and the 3-D glasses kept their attention for a while.

“These glasses are cool,” my youngest said.

“Why do we have to wear them?” his older brother asked. “It won’t be sunny in here.”

“These glasses make things on the screen jump out at us,” I explained.

My youngest son looked at me skeptically. He kept them on for a while before the movie started, but his fidgetiness or his skepticism had them off his face more than on during the movie. To be honest, even with my own 3-D glasses on, I spent more time watching my boys watch the movie. It is always fascinating to see their reactions, especially with dinosaur heads coming at you from the screen. It was also a treat to see The Wizard of Oz and we gauged the boys’ reactions as they took it all in, not sure if an older movie would hold their attention. We should never question the classics because the same enthusiasm shown at the first sight of Munchkin Land was maintained throughout.

The menu of movies being screened for Community Movie Day this year has not been released on the website yet, but now that I have officially saved the date, I fully intend to show up at Chatham Cineplex and let the kids pick something they will like for a fraction of the price.